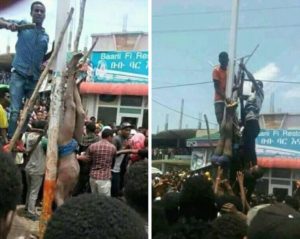 “Ethiopia’s new Prime Minister Abiy Ahmed has electrified his country with a range of reforms since he took office in April, including the release of hundreds of political prisoners. But recent incidents of ethnically and religiously-charged killings in Ethiopia’s Somali and Oromia regions point to ongoing tensions in the country. Much more government attention to these killings, including investigations and justice, is critical to ensuring all citizens can benefit from Abiy’s bold agenda for change,” says Maria Burnett, the watchdog’s Director for East Africa and the Horn in a dispatch released yesterday.

Burnett cited the recent killing of more than 15 people, including 7 priests in the Somali region by the Liyu police that is loyal to the ex-president of the region Abdi Illey, and another 15 people killed in Dire Dawa, Shashemene, Tepi and Adama. She also recalled that the Liyu police killed 41 people and injured 20, in Eastern Hararghe a few days ago.

“The political and ethnic dynamics around these recent killings show that despite reforms and improved rhetoric on human rights from the federal government, insecurity is still a problem – particularly where Liyu police roam unchecked.”

“Bringing perpetrators swiftly to justice is the only way to not only stem the violence, but also signal to Ethiopians that the country is changing for good,” said Burnett.