Over 5,000 internally displaced persons in Kebri Dahar who took shelter at a military camp to save their lives from last week’s attack by Liyou Police and armed youth group allied to ex-president of the region, Abdi Illey, have called for support from the federal government. 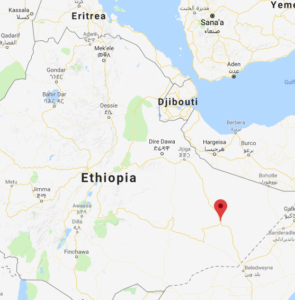 Some of the displaced who spoke to ESAT on the phone from a military camp in Kebri Dahar, a town 238 miles from the regional capital Jijiga, said they have been dependent on handouts from the army for the last six days but are now running out of food.

Attack by the Liyou police and armed youth known as Heego, run by the deposed regional president Abdi Mohamoud Omar, a.k.a Abdi Illey, have targeted non-ethnic Somalis in the region killing at least 90 people and injuring several others. Thousands were forced to displacement internally and to neighboring Somaliland to save their lives. Djibouti has airlifted its nationals from the region saying some of its people were targeted in the attack.

A woman speaking to ESAT from Kebri Dahar said there was no support from the federal government but the army has been supporting them to keep them alive. She said the existing threat from the attackers would not allow them to go back to the town.

Their houses were ransacked and businesses were looted in the weekend attack, a young man told ESAT, and added that the army should take control of the town for them to go back to their normal lives. He said they have tried to go back to their homes but returned to the camp after threat of attack by the militia.

Businesses and residences were looted in Jijiga, Dire Dawa, Warder, Degehabour and other towns in the Somali region over the weekend by militia allied to Abdi Illey after it became imminent that he was to be removed from power. Churches were burnt and priests were set ablaze alive in what appears to be an attempt by perpetrators to incite religious unrest.

Illey was removed from office last Monday and reports show that calm has been restored in the regional capital Jijiga. He is accused of abuse of power, corruption and human rights abuses in the region.

The World Food Program has began providing support in Jijiga while a number of religious and government teams have arrived to coordinate help for the victims.