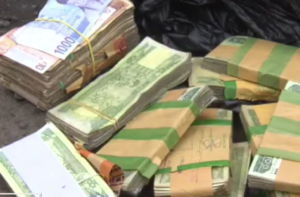 Police also found 57,000 U.S. dollars, over 2,000 euros, over 4,000 British pounds and over 5 million birr, the Ethiopian currency. Authorities say more currencies could be seized when further searches would be carried out in the closed shops.

The illegal exchange of foreign currencies were taking place right under the nose of the the headquarters of the Ethiopian National Bank and the Commercial Bank of Ethiopia.

The government had passed stern warning against the illegal exchange of foreign currency and encourage people to use banks only.

Ethiopia’s economy has been hit by a serious foreign currency crunch forcing authorities to take measures against illegal movement of hard currencies.