Ethiopia: Arrest in mob killing of innocent man in Shashemene 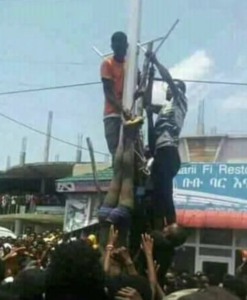 Authorities have arrested suspects of a mob killing over the weekend in Shashemene, a town sitting 160 miles south of the capital Addis Ababa.

Spokesperson for the Oromo regional government, Negeri Lencho, told reporters that arrests were made in the brutal mob killing of a young man at a public rally in Shashemene. Three people have also lost their lives in the stampede.

The rally was held to welcome Jawar Mohammed, an Oromo activist who was based in the United States.

The mob attacked the young man, accusing him of carrying a bomb on his person. He was hanged upside down on a utility pole and beaten to death.

The regional police condemn the killing saying there were no bombs found on him and the car set ablaze by the mob and thought to be carrying explosives belonged to a local government bureau.

The brutal killing of the young man stunned the nation where a number of exiled political groups and activists returned home following a call by a reformist Prime Minister, Abiy Ahmed, who assumed office in early April.

Ethnic violence and mob attacks across the country in the past few month have resulted in the death of innocent citizens.