Volunteers and victims of attacks by Liyou Police and militia in Somali region say the humanitarian situation of internally displaced persons in the region need immediate attention. 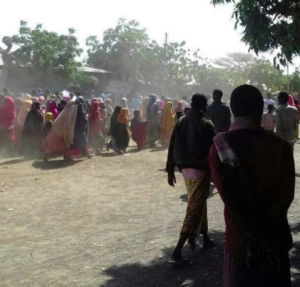 Food and medical supplies were needed immediately, according to a doctor volunteering for Red Cross and Red Crescent, who said he had information that over 20,000 people were uprooted from their homes in Jijiga alone after last week’s attack by the Liyou Police and the Heego armed youth allied to regional ex-president Abdi Illey.

“When the people were forced to flee their homes, they left behind everything. There are those who need to take their medications but they don’t have any medications with them,” the volunteer doctor, Eyob Mekonnen, told the BBC Amharic Service. He said there is a serious shortage of medications.

Those who sought shelter at military camps share food with the army as they have no other ways to find food. The doctor said he has seen about 2,000 people sheltered at a military camp.

Hundreds of people who left Jijiga for Harar during the attack say their situations were the same. They however said help from the administration of the city has kept them alive. Some of the displaced who spoke to ESAT say there are about 300 people sheltered in a school in Harara and more people heading from Jijiga to Harara to find help.

Some of the victims in Jijiga say the absence of Internet has made communication with the rest of the country and the outside world difficult and has made immediate help impossible.

The government’s commission for disaster management meanwhile say food items have been distributed to victims in Jijiga and it is working hard to get more help to those in need.

The regional president for over ten years, Abdi Illey, was removed from office last Monday after allegations of abuse of power, corruption and human rights abuses in the region.

When it became imminent that Abdi Illey was to be removed from power, his Liyou Police and the Heego went on a killing spree, burning churches and killing priests, in what appears to be an attempt to incite religious violence.