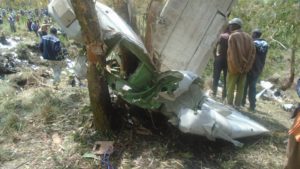 A light military aircraft crashed in central Ethiopia today killing 18 people including 3 civilians. The aircraft was travelling from the eastern city of Dire Dawa to the Ethiopian Air Force base in Debrezeit.

A brief statement by the Ministry of Defense sent to media says the aircraft crashed in an area called Ejere, 20 minutes outside Debrezeit.

Teshome Tenkolu, a former instructor with the Ethiopian Air Force says bad weather, as in the ongoing rainy season with clouds prevalent in the sky, might be one cause for the downing of the Canadian made Dash 6 aircraft.

He however cautioned that one has to wait for the results of investigations to determine the cause of the crash. But he doubts if the country has the capabilities to investigate such incidents.

Fifteen military personnel and three civilians were killed in the crash. Reports say two women and two children were among the dead.