Ethiopia: Towns in Amhara region rally in support of PM 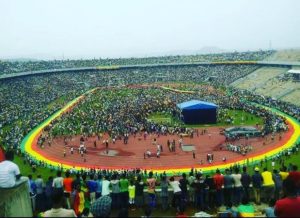 Residents of twenty cities in the Amhara region held rallies in support of Prime Minister Abiy Ahmed and his economic and political reform initiatives.

The scene at the Bahir Dar stadium was like no other as tens of thousands of residents of the city and its environs gather, flying the Ethiopian tricolor.

Regional officials as well as General Asamnew Tsige and an opposition politician Emawayish Alemu, who have been released recently from long term prison have addressed a roaring crowd that also carry cut-out boards of activists and political figures.

Gedu Andargachew, the regional president urge the public to keep a watchful eye on those who wish to undermine the people’s movement for political changes.

“HE PM Dr Abiy Ahmed conveys his heartfelt gratitude to organizers and participants of #Bahirdar largest and peaceful rally in support of the ideals of love, forgiveness, togetherness and the reform measures introduced so far,” tweeted Chief of Staff, Fitsum Arega.

The young Prime Minister has gotten the support from diverse group of people including opposition party leaders and exiled critics for his call of reconciliation, unity and forgiveness to move the country forward.