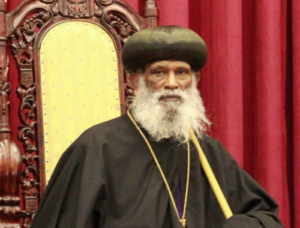 One of the activities on the sidelines of Prime Minister Abiy Ahmed’s visit to the United States is the meeting between the exiled synod of the Ethiopian Orthodox Tewahido Church and the synod in Addis Ababa.

Three archbishops representing each sides will meet in Washington, DC, next week to iron out their differences and perhaps unify the two synods.

A statement released today by the exiled synod says it has been making great efforts to resolve differences peacefully and in line with the dogma of the church.

Abuna Merkorios, the Patriarch of the exiled synod, is the fourth Patriarch of the Ethiopian Orthodox Tewahido Church, anointed in 1988. But when the current ruling party, the EPRDF, took control of the government in 1991, he was forced into exile. According to the wikileaks cables, the then Prime Minister, Tamrat Layne, admitted that he had signed an order to remove Abuna Merkorios from the Patriarchate and appoint Abune Paulos, creating division within the Church.

Abuna Paulos died in 2012 and was replaced by Abuna Mathias, who is now the Patriarch in Addis Ababa.

In exile in the U.S., Abuna Merkorios formed his Patriarchate and had his own followers.

Several attempts to unite the two synods were to no avail. The church has remained divided for over a quarter century, mainly due to the interference of the ruling EPRDF in the affairs of the church.

Sources say the new Prime Minister is determined to unite the two synods. He would like to see the two merge before the conclusion of his visit to the United States at the end of this month.