Administrators of Ethiopia’s Somali and Oromo regions have agreed for federal defense and police forces to intervene to restore peace in their border areas where communal clashes resulted in the death of hundreds of people and the displacement of over a million people. 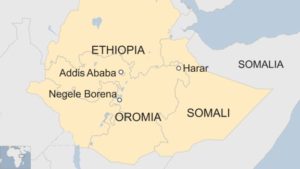 The agreement by Lemma Megersa and Abdi Illey, Presidents of the Oromno and Sdomali regions respectively, came on the day Prime Minister Abiy Ahmed gave a stern order to the military and police forces to be deployed in the borders areas between the regions in Eastern Ethiopia.

Hundreds of Oromos were killed in the last two years of violence while 1.2 million were displaced. The Somali Liyou (special) police have been accused of instigating and taking part in the killings. The Liyou police reports to Abdi Illey, who was implicated in a recent report by Human rights Watch.

Amnesty International has also been urging the government of Ethiopia to immediately disband the Liyu Police unit in the Somali region of the country.