Ethiopia readying to use Eritrean port 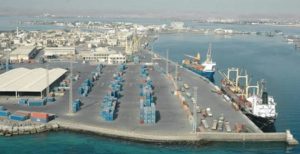 Ethiopia’s Ministry of Foreign Affairs said today that preparations were underway to make use of the Eritrean port of Assab.

The thawing of diplomatic relations in recent month has opened doors for economic cooperation between the two East African countries that were in a no war no peace situation for two decades.

A task force has been set up and is working to make the necessary preparations for Ethiopia to begin using the port of Assab, according to a daily press briefing by the Ministry.

Meanwhile, Ethiopian Airlines will make its first flight to Asmara tomorrow twenty years after the suspension of a route to its northern neighbor.

Ethiopia is also finalizing preparations to reopen its Embassy in Asmara, Eritrea. Eritrea’s Embassy in Addis Ababa has been reopened yesterday in a ceremony attended by Eritrea’s President Isaias Afwerki and Ethiopian Prime Minister Abiy Ahmed. The two leaders joined hands to raise the flag of Eritrea at the Embassy compound in Addis Ababa, undoing the two decades old frozen diplomacy.

Afwerki and Ahmed had also made a visit to the other country last week to the jubilation of residents of the two capitals who took to the streets in their tens of thousands to show their support for the two leaders.