Residents of several towns in Ethiopia took to the streets on Saturday and Sunday in support of Prime Minister Abiy Ahmed and his reform agendas. 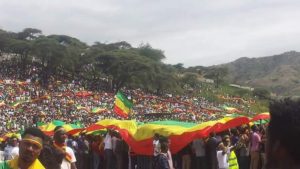 Thousands of people in towns in Northern and Southern Ethiopia held demonstrations to express support for the Prime Minister’s reform initiatives and his call for peace and forgiveness to leave behind past resentments.

Residents in Enjibara, Dangla, Abrehajira, Soreqa, Raya, Ataye, and Arba Minch, among other towns, have came out in their thousands carrying the Ethiopian flag and chanting slogans of support for the new Prime Minister.

In Arba Minch, demonstrators carried a 1200 meter long flag, in what has now become a competition among towns in Ethiopia for displaying the longest flag.

Meanwhile, Ethiopians in Toronto, Canada held a rally yesterday in support of their Prime Minister. Eritreans have also joined the rally to express their solidarity with their Ethiopian kins.