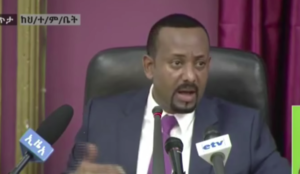 Ethiopian Prime Minister, Abiy Ahmed says he expects the country’s economic growth to be under 10% this year.

The Premier was speaking today at the Parliament that has approved a budget of 12.6 billion dollars for the fiscal year that begins next week.

Ahmed said focus should be given to the growth of local industries and increase export to lessen the impact of forex crunch that has choked the country’s economy.

Sixty-percent of the budget would be allocated to projects that target decreasing the impact of poverty.

“The focus should be on completing projects that are underway, not to start new ones,” he told the Parliament.

A number of measures would be taken to control inflation and stabilize the economy, he noted.

Abiy Ahmed took office in April and has since introduced reform initiatives to bring about an economic turn around in the East African country. He announced last month that major sectors of the economy like telecom, power plants, logistics and airlines would be partially privatized.