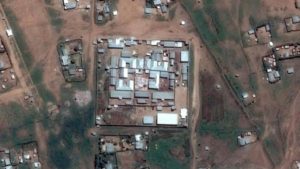 Prisoners at the Jail Ogaden in the Somali region of Ethiopia have been transferred to several other prisons in the region after a report by the Human Rights Watch exposed torture and human rights abuse at the notorious detention center.

Abdulahi Hussien, a former advisor to Abdi Illey, the regional president, told ESAT that thousands of prisoners have been transferred to several other jails and the jail itself was being renovated to destroy evidences of torture. Hussien said the torture rooms were taken apart to remove evidences of torture.

Abdulahi Hussien, a former advisor to the regional president, left the country few years ago and exposed extrajudicial killings and other crimes in the Somali region, backing with video evidences.

Located in the regional capital JiJiga, Jail Ogaden holds prisoners accused of being members and supporters of the Ogaden National Liberation Front (ONLF)

“Female prisoners gave birth in their cells without access to skilled birth attendants, often in grossly unhygienic conditions. The plight of children, some allegedly born in Jail Ogaden from rape by prison guards, is especially tragic,” the report said.

The report, which is based on about 100 interviews including 70 former prisoners of Jail Ogaden, documented torture, rape, long term arbitrary detention, and horrific detention conditions in Jail Ogaden between 2011 and early 2018.

“Officials stripped naked and beat prisoners and forced them to perform humiliating acts in front of the entire prison population, as punishment and to instill shame and fear,” the report said.

Many of the former prisoners interviewed said they saw people dying in their cells after being tortured by officials, the Human Rights Watch report said.

Hussien said in an interview with ESAT that the jail is now being renovated to remove any signs of torture.

“Having heard few days ago the the report was to be released, Abdi Ille ordered the transfer of prisoners to several other jails in the region and began renovating the cells where tortures had been committed,” Abdulahi Hussien told ESAT. “The torture rooms have been destroyed,” Hussien said.

A website affiliated with the regional administration, cakaaranews, says “accusation on Liyou police, committing punishment and torture against prisoners in central jail, is baseless and fabricated.”

“At this moment prisoners remained in central jail are not more than twenty detainees who have committed rape and murders.”

The website denied there were any ONLF prisoners anywhere in the region and in fact all ONFL prisoners have been released. “In central jail or somewhere else there is no a single ONLF prisoners. All ONLF prisoners were pardoned.”

The website says the cells at Jail Ogaden were equipped with “big television screens, modern beds” and the jail has “health facilities and entertainment areas.”

The ONLF is one of three political organization labeled as a “terrorist” until yesterday when the Ethiopian Parliament voted to remove the “terrorism” label it designated seven years ago. The two others are Patriotic Ginbot 7 (PG7), the Oromo Liberation Front (OLF).

The TPLF regime used the Anti-terrorism Proclamation and the “terrorism” label on opposition groups to arrest, imprison, torture and kill opponents, critics and journalists.