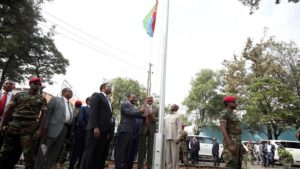 Eritrea reopened its Embassy in Addis Ababa, two decades after the compound near the soccer stadium in the capital was deserted by the Eritreans and was used for unspecified purposes by the Ethiopian government.

The flag raising ceremony at the Embassy came at the conclusion of a three day visit by Eritrean President Isaias Afwerki to Ethiopia. Afwerki and Ethiopian Prime Minister Abiy Ahmed joined hands to raise the Eritrean flag as an Ethiopian band played the national anthem of Eritrea.

The visit by the two leaders to the other country and the reopening of the Eritrean Embassy in Addis Ababa was hailed as an important and bold step in the right direction for thawing two decade old severed relations and bring about much needed economic cooperation.

The visit by Afwerki came as a return gesture and a week after Ahmed paid a visit to Asmara, where the two leaders signed a joint declaration ending a state of war and opening a new and peaceful chapter in relations between the two nations that share so much in linguistic and culture. The two countries have also agreed to implement the decision by the Eritrea-Ethiopia Boundary Commission that was establish in 2000 to delimit and demarcate the border between the two countries. The Commission was set up following a two year trench style border war that claimed the lives of at least 70,000 people.

“The decision on the boundary between the two countries will be implemented,” the declaration between the two leaders reads. The leaders also agreed to forge cooperation in the areas of politics, economy and security; while also resume transport, trade and communications.

In Addis Ababa on Saturday, thousands of residents of the capital lined up the streets, singing and dancing as the motorcade escorting Afwerki and Ahmed proceeded from Bole International Airport to the National Palace. It was a scene never witnessed before in the capital; a record crowd to receive a foreign leader.

Afwerki said on arrival that the two people are one and no force will separate them.

“We are now jointly embarking – with determination – on the path of development, prosperity and stability in all fields and fronts,” according to an official translation of his speech by the Eritrean Ministry of Information.

“We shall not tolerate any act that is aimed at disrupting and disturbing our love and harmony; assailing and terrorizing our peace and stability; and, impeding and destroying our development and growth,” he told a roaring crowd at the Millenium Hall in Addis Ababa. He was awed by the love pouring in from the crowd and tapped his chest in response as the crowd chanted “Isu! Isu!” referring him with an affectionate and short version of his name widely used by Asmarinos.

Dr. Ahmed said the two countries, working together as one, would bring hope for the Horn of Africa and the continent.

Afwerki and his delegation has returned home early Monday and was seen off at the airport by Prime Minister Ahmed.

Addis Ababa and Asmara have, in the last few weeks, witnessed the end of suspicion, animosity and bitterness between them and the closing of a checkered past. They have charted out a future filled with peace and cooperation for the mutual benefits of people on both sides.