Ululation of joy and euphoria in the Eritrean capital Asmara early Sunday as Eritreans welcome an Ethiopian leader after two decades of war and bitterness. 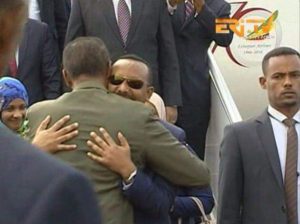 Well before Ethiopian Airlines carrying Abiy Ahmed touched down at the Asmara International Airport, residents of the city lined up the streets waving the flags of the two nations in an emotional day for the people of both countries. It will also be the first time that an Ethiopian airlines has flown into the city in over twenty years.

Tears of joy was flowing down the cheeks of some of the people, who have borne the most, the legacy of past wars and twenty years of no war no peace deadlok.

Ahmed was welcomed at the airport by none other than the Eritrean President, Isaias Afwerki, who opened his arms wide and gave Ahmed a big hug, marking the end of bitterness and the beginning of peace and a new chapter in relations between the two countries.

Eritrean women sing and dance, carrying branches of palm trees and tossing pop corns into the air and the two leaders, in the ultimate cultural gesture of welcome, peace and love. The women also took turns to give hugs and kisses to Ahmed, who would do likewise to almost everyone he meets.

“No leader has received such a warm welcome like today in Asmara in the history of #Eritrea extended by the people to PM Abiy of #Ethiopia,” tweeted Estifanos Afeworki, Eritrean Ambassador to Japan, a diplomat who has been a vocal proponent of peace and new chapters in relations between the two countries.

The summit between the two sides in Asmara was preceded by overtures of peace by Ethiopia’s Ahmed last month, which was reciprocated by Afwerki, who sent a delegation to Addis Ababa a week ago. Those events were instrumental in thawing tense diplomatic situations.

The summit is expected “to set the tone for rapid, positive changes on the basis of respect of sovereignty & territorial integrity, equality and mutual interest of both countries,” according to Yemane G. Meskel Eritrea’s Minister of Information.

Today marks a historic day for the two countries that went to war over a piece of land between their borders; a war that has debilitated their economies. Over 70,000 lost their live in the trench style war from 1998-2000.

Analysts say the war was more that a fight over a territory and had also to do with economic and other policy decisions on both sides, which each consider a stab in the back by the other.

The scene in Asmara today and the sight of Eritrean flags at rallies by supporters of Abiy Ahmed in cities across Ethiopia were definitely signs that the people on both side are ready for peace and cooperation, leaving aside past animosities.

“The people were never the problem; it was bad decisions by the governments on both sides. The two leaders, especially the new Prime Minister in Ethiopia should be congratulated for breaking the no war no peace deadlock of two decades,” a regional analyst approached by ESAT commented.