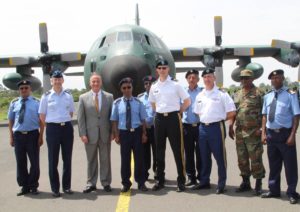 Mike Raynor, Ambassador of the US to Ethiopia has participated in a ceremony to deliver a C-130 transport aircraft on behalf of the United States to Ethiopia yesterday, according to the US Embassy in Addis Ababa.

Jane’s Information Group, a British publishing company specialising in military, aerospace and transportation topics said the C-130E adds to one already donated by the US government in 2014 to aid airlift duties for the Ethiopian contingent fighting as part of the African Union (AU) Mission force in Somalia.

“The C-130 will further enhance Ethiopia’s capacity to play a vital role in regional peacekeeping missions, enabling Ethiopia to move humanitarian supplies where they are needed in a timely manner and protect the lives of civilians in conflict areas,” said the US Embassy in Addis Ababa.