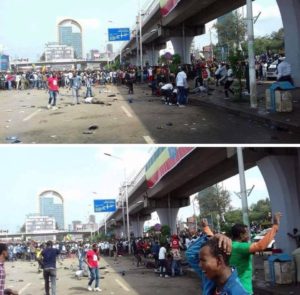 One person was killed and 165 people were injured in Addis Ababa when a grenade was thrown at a crowd near a stage where Ethiopia’s Prime Minister Abiy Ahmed and other dignitaries were sitting to address a rally that was held in support of the new Premier.

According to a statement by the Ethiopian Federal Police Commission 15 people were critically injured. Six suspects were arrested.

It was not immediately clear if the Prime Minister was the target. But witnesses near the explosion told reporters that it could not have been otherwise. Police say investigations are underway.

Witnesses told local media that a hand grenade was thrown near the stage where Abiy Ahmed was sitting, immediately after he addressed a record crowd that came out in support of his leadership. One witness told reporters from his hospital bed that he saw a woman carrying explosives and was quickly handed over to police.

Video shared on social media shows what appears to be a loud explosion near the stage where the PM was sitting. He was quickly escorted off.

A police car that was damaged from the explosion was later set ablaze by a mob. It was not immediately clear why the mob had targeted the police car. A picture shared on social media show people looking through the shattered windows of the police car. A luggage could be seen in the back seat, which was later seen in another photo being carried away by two people, one person carrying the bag while sitting on the shoulders of another person.

After the bomb attack, the Prime Minister appeared on a live television broadcast to express his condolences. He looks shocked and disturbed by what happened.

Abiy Ahmed said the attack was orchestrated and was carried out by “professionals.” But he did not name any group for the attack, which many demonstrators believed was carried out on his life. He encouraged people with information to come forward and help the investigation by police.

“The perpetrators have tried to create a bloodbath,” he said.

The rally at Meskel Square was held in support of the Prime Minister and his efforts to bring about political reforms. He is widely admired for changing the tone of tense political environment before his appointment.

Ahmed, who assumed the Premiership in April, quickly shot to fame and became the favorite among Ethiopians for his tone of reconciliation, peace and forgiveness in a country where strong ethnic sentiment runs high.