Over fifty houses went up in smokes as clashes between the Guji and Gedeo communities in Southern Ethiopia resumed yesterday. 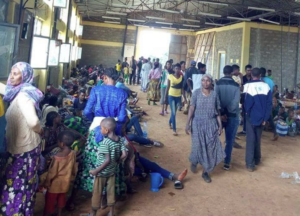 File photo of the displaces in the conflict

The violence which has resumed after a month long lull has so far resulted in the death of over 200 people and the displacement of over 2,000 people.

A recent assessment conducted by the UN Office for the Coordination of Humanitarian Affairs in Gedeo zone found that at least 274,5481 people were displaced from West Guji to Gedeo zone following the violence that erupted along the regional boundary in mid-April.

According to the report some 84,000 people were also displaced in West Guji zone. More than 4,000 houses were reportedly burnt down or damaged in West Guji and livelihoods destroyed.

According to ESAT sources, yesterday’s clash between the two communities was reported in the town of Gedeb, a transportation route to Moyale. The sources say the road to Moyale was shutdown.

Exact figures were hard to come by but thousands were feared displaced from Guji to Gedeo zone following yesterday’s violence.

Several coffee processing factories, businesses and vehicles were destroyed in the conflict between the two communities.

Eleven more people, including six children were killed in April.