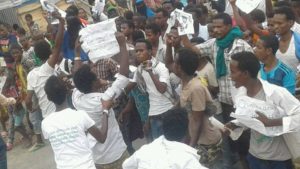 Residents of towns in Afar region took to the streets demanding the release of political prisoners and objecting interference by the neighboring Tigray region in the affairs of the Afaris.

Video received by ESAT show police firing shots as demonstrators chant slogans denouncing the regional government. It was not clear if there were any casualties.

Protesters in Semera, Aysaita, Barahle, Koneba and other towns demand the release of Rashid Saleh, a human resource head with Semera University, whom the Afaris say had been kidnapped six months ago by authorities because he fell out of favor with an army general.

Although the detention of Saleh was what sparked the protest in the Afar region, it brought to light general grievances by the Afaris, who say the federal government has ignored the region and they have not been beneficiaries of economic developments that the regime claims to espouse. Afari activists say salt and other minerals in the region were exclusively controlled by officials of the ruling Tigray People’s Liberation Front (TPLF) and their cronies.

The ANDP is the only party ruling Afar for the last 24 years.