The towns of Awassa (Hawassa) and Sodo in Southern Ethiopia have seen deadly mob attacks against innocent residents as federal and regional security forces in the area refuse to intervene to stop the bloodshed. 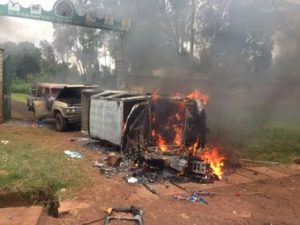 Although exact figures are not known, several people were believed to have been killed today by an unidentified mob in Wolayta. According to a resident who spoke to ESAT from Sodo town, 20 people were killed in the violence today. ESAT could not verify the killings but the resident also said upto twenty homes were set ablaze.

Some blame the Sidamas for attacking the Wolaytas and other ethnic groups, while critical observers of the developments in Southern Ethiopia blamed saboteurs and groups supported by the regional ruling party, the South Ethiopian People’s Democratic Movement, and the TPLF, that is losing its grip on power in the federal government. The critics accuse agents supported by the TPLF of instigating violence across the country to discredit the administration of Prime Minister Abiy Ahmed.

The Office of the Government Communication Affairs seemed to agree with the foregoing analysis of the critics. The office says the deadly violence witnessed in various parts of the country were instigated by those who are bent on sabotaging the efforts of the government in bringing reforms and resolving the multifaceted problems in the country. The statement by the Office said the violence was perpetrated by individuals whose personal interests have been negatively affected by the wind of change blowing in the country.

Unrest has also continued in Awassa, 75 miles South of the Addis Ababa, has also seen violence for the third day. Residents blamed an organized mob for attacks and looting of personal properties. Some neighborhoods blocked roads with rocks to prevent the mob reaching their turf.

Both the Wolayta and the Sidama Zones demand they be given regional status. But the political and administrative demand took a violent turn in recent days.

Meanwhile the Association of Gedeo Community in North America said yesterday that over 200 people were killed in ethnic violence in Guji Zone in Southern Ethiopia over the past ten days while over 300,000 have been displaced. The violence between the Guji and Gedeo groups that began in April has also resulted in the destruction of schools, churches and private properties.

The Association of Gedeo Community in North America has documented the names of 137 ethnic Gedeos who were killed by the Gujis in West Guji Zone.