Forty-six Ethiopians have reportedly drowned yesterday when their vessel capsized in high waves as it approached Yemen’s shore, according to the International Organizations for migration (IOM). 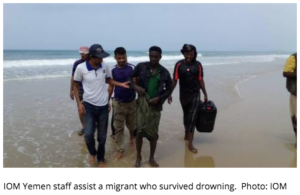 The UN Migration Agency said the 37 men and 9 women were among the about 100 migrants crammed onto a smuggler’s boat that left the port of Bossaso, Somalia on Tuesday.

According to accounts of survivors, those who drowned were without life jackets and they were pitched headlong into the rough sea when high waves struck close to the shore.

“The Gulf of Aden’s shameful migration tragedy is one that is hidden in plain sight,” said Mohammed Abdiker, Director of Department of Operations and Emergencies.

“Over 7,000 poor migrants take this perilous journey every month; some 100,000 took it just last year. They are treated appallingly and go through horrendous conditions. This has to end,” he added.