Ethiopia’s Prime Minister has made calls to opposition groups abroad to give up their arms and come back home to peacefully take part in the country’s politics. 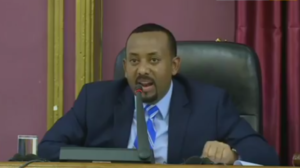 Presenting his report to the Parliament, Abiy Ahmed said the country can only benefit from peace but not war; and called on Patriotic Ginbot 7 (PG7), the Oromo Liberation Front (OLF) and the Ogaden National Liberation Front (ONLF) to give up arms.

He said the use of arms to come to power was “outdated and old fashioned” and the country would not benefit from it.

Last week the House of People’s Representatives has made an unusual request, demanding that the Prime Minister present a report on the state of the country. Abiy Ahmed spoke on pertinent issues in the country and reforms made by his government in the last few months.

He said although the country’s constitution clearly stipulates that the defense and security should be free from politics, that has not been the case in practice.

Speaking about the recent decision of his government to implement the Algiers agreement with Eritrea to resolve border disputes, the Premier said there was nothing new to the decision by his government except implementing a binding decision that Ethiopia has already agreed to in December 2000.

“Does the constitution allow torturing prisoners and keeping them in a dark cell?” he responded to a question with a question. “This is also an act of terrorism on the part of the government,” he said in what amounts to admitting that the government was terrorizing its people.

The Prime Minister also called on various ethnic groups in the country to make peaceful coexistence their priority and avoid unnecessary conflict and bloodshed. Ahmed encouraged people to forgive. “Forgiveness has the moral authority.”

Ahmed also spoke at length on the need for economic integration in the Horn of Africa without regard to borders that he said were drawn by colonialists. (EW)