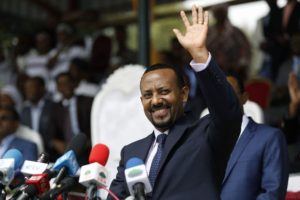 Residents of the capital Addis Ababa and its environs as well as towns across Ethiopia will hold a rally in support of the country’s new Prime Minister Abiy Ahmed.

Organizers say the rallies are held in support of the ongoing efforts by the Prime Minister in pushing for reforms and to encourage Abiy Ahmed to build on the already achieved results to bring about meaningful democratic reforms and national reconciliation.

Residents of Dessie, Gondar and a number of towns in the Oromo region will hold the rally.

The office of the Government Communications Affairs said the Prime Minister has accepted the invitation by organizers to address the rally at the central Meskel Square in the capital Addis Ababa.

Abiy Ahmed has garnered huge support for his tone of reconciliation, his call for peace and unity among Ethiopians and for extending an olive branch to opposition groups. He has also been credit for the release of thousands of political prisoners since he assumed office on April 2, 2018.