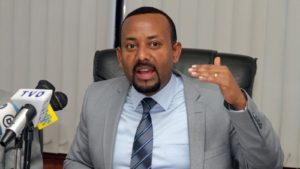 The Ethiopian government announced that it has unblocked 264 websites, blogs as well as radio and tv transmissions from abroad.

“A free flow of information is essential for engaged & responsible citizenry,” Chief of staff at the Prime Minister’s office, Fitsum Arega said in a tweet this morning announcing the lifting of the ban on websites and blogs that were critical to the government.

“Freedom of expression is a foundational right that other rights depend on,” Arega tweeted and adds, “only a free market of ideas will lead to the truth.”

The announcement also gives Ethiopians access to this website, the Ethiopian Satellite Television and Radio (ESAT), a site that has been blocked since its inception and its satellite transmissions jammed at least 25 times.

The lifting of the ban also frees websites run from abroad and critical of the government. Some have been blocked for over ten years.

Prime Minister Abiy Ahmed, who took office in early April has introduced sweeping political reforms in a nation that has been intolerant to dissent and free expression.