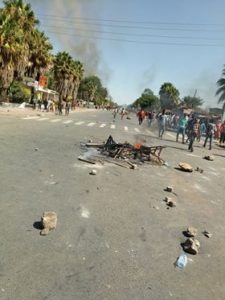 The scene in Wolkitie today

Information reaching ESAT show several people were injured when a cultural festivity turned violent in Awassa, 175 miles South of the Addis Ababa, and considered a regional capital in Southern Ethiopia.

Meanwhile, homes and vehicles were set ablaze in Wolkitie town in clashes between the Qebena and Gurage groups. Both sides claim the town belongs them and demand that the other should leave the town.

Soccer rivalry between the two sides did not help the situation. Businesses remained closed today in Wolkitie.