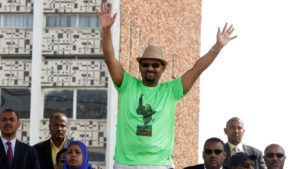 Speaking at a town hall meeting with residents of Semera, in Afar region of Northern Ethiopia, Dr. Ahmed said he and his supporters would repulse any attempt to reverse the momentum of change in the country.

“Change has come to EPRDF; there is reform within the EPRDF. 90% of members support change and they believe we ought to apologize and recompense the people; and transform promises into deeds,” he told the town hall meeting.

He encourage the remaining party members to join the movement for change and serve the interest of the people. He warned that those who do not embrace change would not continue as members of his party.

The Premier vowed that the country would not go back to the days of anarchy, chaos and violence that had threatened the security and survival of the nation.

Abiy Ahmed assumed office in April and has encouraged his people to forgive, move on from past troubles and work for peace and reconciliation in a nation that has seen its share of deadly violence.

Since he took office, he toured a number of regions shaken by communal clashes and ethnic motivate attacks calling for calm and restraint.