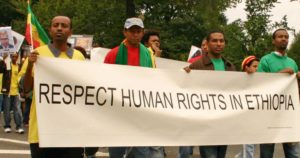 The Ethiopian Parliament today passed an amnesty law to “pardon” those individuals that the government formerly accused, charged and/or sentenced after alleged crimes such as “attempt to overthrow the government, outrage against the constitution, treason and other political crimes.”

The long awaited law comes after severe criticism against the previous administration, controlled and manipulated by the Tigray People’s Liberation Front (TPLF), that criminalizes dissent and use such laws as the Anti-terrorism Proclamation to target opposition political parties and critical journalists.

Thousands of political activists, members and supporters of opposition parties, critical journalists and citizens with dissenting views have been jailed, tortured and deliberately sentenced to prison terms on trumped up terrorism and other charges by the regime’s kangaroo courts.

Many of those have been released in the last few months after a nationwide protest against the TPLF and international uproar and condemnation of human rights abuses by a security and intelligence controlled by an ethnic party.

The law stipulates that a board would be formed comprised of relevant ministries and government departments to implement the provisions, accept and process appeals for amnesty and present recommendations to the Prime Minister for final decision.

Prime Minister Abiy Ahmed, appointed in April, has oversaw the release of thousands of political prisoners, including leading members of opposition groups and journalists. He is also credited for proposing economic and political reforms in a nation that was ruled with iron fist by ethnic oligarchs.