Over 200 people were killed in ethnic violence in Guji Zone in Southern Ethiopia over the past ten days while over 300,000 have been displaced. The violence between the Guji and Gedeo groups that began in April has also resulted in the destruction of schools, churches and private properties. 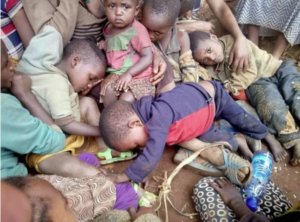 The Association of Gedeo Community in North America has documented the names of 137 ethnic Gedeos who were killed by the Gujis in West Guji Zone.

The report by the Association, sent to the office the Prime Minister, and copied to media outlets show that women were also gang-raped.

“The nature of the attack is horrifying,” the document said and added that “apart from firearms, machete and spears are used in the killings. Several ethnic Gedeos were beheaded, thrown into rivers or burnt in their locked houses.”

The UN Office for the Coordination of Humanitarian Affairs says over 270,000 ethnic Gedeos were displaced from Guji while well over 5,000 houses were burnt down.

Meanwhile three people were killed today in Wolkitie town, 93 miles southwest of the capital Addis Ababa while over 100 were injured in ethnic attacks that began on Tuesday. Thirty homes and four vehicles were also set ablaze in clashes between the Qebena and Gurage groups. The Qebenas claim the town belongs to them and demand that the Gurages should leave the town.

In another development, thirteen people were arrested in Awassa, 175 miles South of the Addis Ababa, when protesters tried to burn residences of the town’s mayor and administrator of the Sidama zone.

Demands by the Wolaytas for their zone be given regional status and self administration took a violent turn this week with several interest groups standing for and against the regional status. Other ethnic groups in the town accuse the Wolaytas of unleashing unprovoked attack.