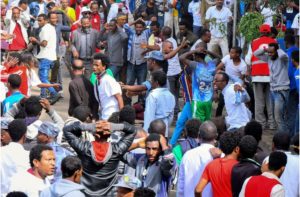 A grenade attack at a rally in Addis Ababa in support of Ethiopia’s Prime Minister, Abiy Ahmed, was an assassination attempt against his life, according to witnesses and organizers of the rally.

The attack left one person dead and over 155 injured. Nine people are in critical condition.

A man dressed in police uniform was trying to hurl the bomb in the direction of the stage where the Prime Minister had just finished his speech. But another police officer hold the hand of the thrower, at which point the grenade went off, according to interviews by several media outlets with witnesses and organizers of the rally.

“The Prime Minister just concluded his speech. And at that moment there was a grenade thrown against him. I think the guy wants to throw it to the stage,” Seyoum Teshome, one of the organizers told reporters. He said another person next to the alleged thrower hold his hand and the grenade went off in the scuffle.

“The target was the prime minister because the suspect was aiming to throw the grenade by the right side of the stage where he was sitting.” Teshome said in an interview with reporters.

“Someone was trying to throw the grenade and then another person touched his hand so he missed the target and the grenade fell without reaching the stage,” he said.

Another witness, Abraham Tilahun, told the Associated Press that the man with the grenade was wearing a police uniform.

Nine senior federal police officers and security officials, including the deputy commissioner of the Addis Ababa police, were arrested on suspicion of complicity in the grenade attack, Ahmed Shide, the minister of government communications told the national broadcaster. Six suspects are under arrest.

After the bomb attack, the Prime Minister, Abiy Ahmed, appeared on a live television broadcast to express his condolences. He looks shocked and disturbed by what happened.

Abiy Ahmed said the attack was planned and coordinated; and it  was carried out by what he called “professionals.” But he did not blame any  group for the attack.

“The perpetrators have tried to create a bloodbath,” he said.

The rally at Meskel Square was held in support of the Prime Minister and his efforts to bring about political reforms. He is widely admired for changing the atmosphere of tense political environment before his appointment. Thousands of political prisoners were released on his watch. Some of the released were leading members of opposition parties.

Ahmed, who assumed the Premiership in April, quickly shot to fame and became the favorite among Ethiopians for his tone of reconciliation, peace and forgiveness in a country where strong ethnic sentiment runs high. (EW)