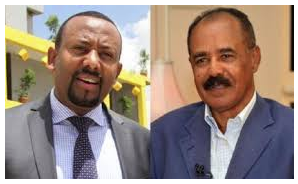 In response to an olive branch extended from Ethiopia, Eritrea says it would send a delegation to Ethiopia to “to chart out a plan for continuous future action.”

“Outside myopic considerations of public relations stunts and advantages, we will send a delegation to Addis Abeba to gauge current developments directly and in depth as well as to chart out a plan for continuous future action,” Eritrean President Isaias Afwerki said speaking on the commemoration of Martyr’s Day in the capital Asmara.

The response from Afwerki came two weeks after Ethiopia said it would fully implement the Algiers agreement signed in 2000 between the two countries after a two year trench war that claimed the lives of about 70,000 people.

In his inaugural speech to the Parliament on April 2, 2018, and in a couple of other occasions, Ethiopia’s new Prime Minister, Abiy Ahmed expressed his readiness for peace talks and encouraged Eritrea to come on board. His party, the ruling Ethiopian People’s Revolutionary Democratic Front (EPRDF) has also announced on June 5, 2018 that it had “fully accept” the Ethiopian Eritrean Boundary Commission decision.

The Commission made its decision in 2002 to delimit the boundary between the two countries, but has not been implemented as Ethiopia refused to return the territory of Badme, the flashpoint of the war that was awarded to Eritrea by the Commission. Ethiopia insisted on “normalization” of relations before implementation of the Commission’s decision.

A former province in Ethiopia, Eritrea declared its independence in 1993 following a protracted war with Ethiopia. The two countries went to war again in 1998 over territories that were not clearly delimited after independence. Analysts say the war was more than a dispute over territory and had also to do with economic decisions made by Ethiopia that Eritrea took as stab in the back.

Once comrades in arms against the war with a regime in Ethiopia, bitterness between the Eritrean People’s Liberation Front (EPLF) that controlled Eritrea and the Ethiopian People’s Liberation Front (EPRDF) that assumed power in Addis Ababa, has led to one of the world’s bloodiest wars in which human waves was used to clear mines. There were several skirmishes and shelling between the two after the war ended in 2000.

But things have changed in the last few weeks, and they are for the better. Ethiopia’s Prime Minister promised to make sweeping political changes in the country and also made it clear that he would work with neighboring countries to bring about peace and economic integration. He specifically singled out Eritrea, describing the no war no peace situation as the “the war with no deaths” but that which is seriously harming the people on both sides, with serious economic costs.

Abiy Ahmed’s chief of staff said in a tweet that the Premier had congratulated Afwerki for the positive response and would welcome the Eritrean delegation.

“HE PM Dr Abiy Ahmed thanked & congratulated President Isayas Afworki for the positive response to Ethiopia’s #peace and reconciliation overture. He also expressed his readiness to welcome warmly and with considerable goodwill the Eritrean delegation to Addis,” the chief of staff tweeted.

“Ethiopia is now at a turning point or transition……. the positive direction that has been set in motion is crystal clear,” Afwerki said and added that “it is natural that we see our various sectoral developmental programmes in relation to our neighbours in general and with Ethiopia in particular.” (EW)