A bank robbery in Ethiopia’s capital Addis Ababa went on the blink when a driver carrying the alleged crooks drove on the wrong way and hit another vehicle. 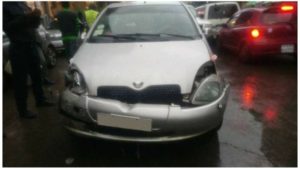 The robbers tried to runaway after the crash but were caught by passersby, who thought it was just a case of a hit and run.

A peek into the car revealed a stash of about 206,000 dollars hidden in a bag.

A report by the BBC Amharic Service in Addis Ababa quoted a police commander as saying that the cash was heisted from the Abyssinia Bank nearby.

The police commander and a bank executive say the robbers colluded with a security guard at the Bank to carry out the break-in. All suspects were apprehended, according to the report.

A third suspect who appeared from the back seat of the car and threatened onlookers with a knife was also tackled and given to police custody.