China cuts back investment in Ethiopia

A report by the Financial Times says Chinese companies, which are the major investors in Ethiopia, are finding it difficult to get loans from their creditors to finance projects in the East African country. Chineses banks and credit insurance companies are worried about Ethiopia’s increasing debt and foreign currency crisis, according to the report. 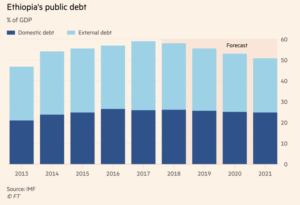 ESAT reported last week, based on its sources at the National Bank of Ethiopia, that the country’s foreign currency reserve was at all time low, only enough to cover two weeks of imports.

“Business people, diplomats and bankers said Chinese entities, which have loaned more than $13bn between 2006 and 2015 for everything from roads and railways to industrial parks, were now taking a ‘more cautious approach’ to Ethiopia,” said the report.

“The Chinese have said they’ve reached their limit,” Financial Times quoted one diplomat in Addis Ababa as saying. “We’re way overextended here, they told us openly.”

“Two investors said that Sinosure, China’s main state-owned export and credit insurance company, was no longer extending credit insurance to Chinese banks for projects in Ethiopia as willingly as it used to,”

“There’s a new reluctance to back investments in Ethiopia,” the report quoted one investor as saying. “It’s not completely clear why but it appears they’re worried about the debt profile and forex crisis,” the investor said.

The Financial Times report recalled that the International Monetary Fund forecasts growth of 8.5 per cent this year, which it said represents a fall from the highs of recent years.

“Ethiopia’s economic headwinds centre around the increasing shortage of foreign exchange as imports have outstripped exports by around 400 per cent each year for at least the last five years.”