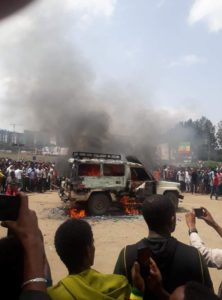 Undisclosed number of people have died and others injured in a grenade explosion in a rally in Addis Ababa, where Prime Minister Abiy Ahmed was attending.
Video shared on social media shows what appears to be a loud explosion near the stage where the PM was sitting. He was quickly escorted off.
The police car that was thought to have carried the explosive was torched by a mob on the scene.
Few minutes after the incident, the Prime Minister appeared on a live television broadcast to express his condolences.
Abiy Ahmed said the attack was orchestrated and was carried out by people with the know how of explosives. He encouraged people with information to come forward and help the investigation by police.
The rally at Meskel Square was held in support of the Prime Minister and his effort to bring about political reforms.
Few minutes before the explosion, the Prime Minister delivered a speech to a roaring crowd.
Abiy Ahmed ESAT ESAT English Ethiopia explosion Prime Minister Abiy Ahmed 2018-06-23
Central