Ethiopia said it would implement the Algiers peace agreement signed with Eritrea in December 2000 and “fully accept” the Ethiopian Eritrean Boundary Commission decision that came after a two year bloody war between the two neighboring countries. 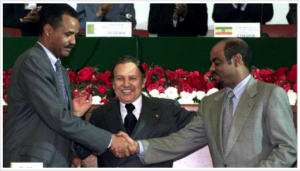 According to the national broadcaster, ETV, the executive committee of the ruling EPRDF has made the decision in its regular meeting today.

The two countries agreed on a binding decision by the Commission following a two year bloody war between 1998-2000 in which an estimated 70,000 people lost their lives on both sides.

The Commission handed down its decision in 2002, awarding Badime, the flash point of the war, to Eritrea.

Ethiopia refused to return the territory of Badime to Eritrea and insisted that “normalizations” of relations between the two countries should come before any implementation of the decision by the Commission.

The Boundary Commission’s decision delimit the border between the two countries.