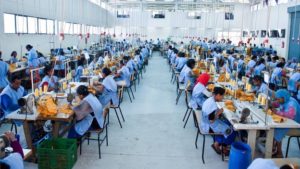 The report by Just Style said the campaign is aimed at securing better wages and worker rights for employees of Ethiopia’s textile and garment industries.

The report said Industrial Federation of Textile, Leather and Garment Workers Trade Unions which is an affiliate of the IndustriAll Union is the leader in the campaign dubbed “end poverty wages.”

Ethiopia’s garment industries produce textile and garment for major brands such as H&M, Tommy Hilfiger and Calvin Klein. The workers are however paid as low as $20 a month and campaigners are demanding to bring the salary to at least $121 a month.

The Just Style report also said discussions were underway among the Confederation of Ethiopian trade Unions, the ILO, and representatives of Ethiopian government including the Prime Minister.

“We support Ethiopian unions on the introduction of minimum wages to set at a level of a living wage,” just Style quoted Christina Hajagos-Clausen of IndustriAll global union as saying.

“We demand further that workers be paid what other garment workers earn globally,” she added.