Ethiopia to issue citizenship to thousands of South Sudanese refugees

Ethiopia is to issue citizenship to hundreds of thousands of South Sudanese refugees in line with the government’s commitment
to the New York Declaration. But the news does not bode well for the Anuak community in Gambella. 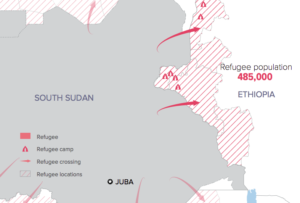 There are about 485,000 south Sudanese refugees in Gambella, the largest number of refugees in Ethiopia, most of whom are from the Nuer ethnic group.

Relations between the Nuer and the Anuak has always been sour, to put it mildly. Rivalry over pasture and turf battles have always been part of their relations. Added to this, there have been cross border raids, killings, child abductions and rape by the Murle in South Sudan against their Ethiopian kins.

ESAT sources say regional and federal authorities have finalized preparations to issue citizenship to 441,000 South Sudanese refugees, most of whom are from the Nuer tribe.

Activists believe the move by the government was to further dominate the population of the Anuaks who have been seen by the ethnic oriented regime as opponents to its divide and rule policies.

Ujulu Cham of the Ethiopian Anuaks Development Foundation believes the decision by the government was not a humanitarian gesture to accommodate refugees but a political decision to further alienate the Anuaks by dominating their population and reducing their representation in local councils and decision making offices.

Ujulu Cham said the Anuaks have been made to have no voice in the politics of the region and they have been devoid of political power.

Mr. Cham added that the refugees have been a source of cheap labour for agricultural investors from Tigray who have unfettered access to the region’s natural resources and who have amassed agricultural land in the name of development.

Cham said while there were already Ethiopians displaced due to cross border attacks from the South Sudanese, it was perplexing to see that their demand to be resettled to their land has been ignored and authorities are settling the South Sudanese in their place.

In April 2016 alone, over 20,000 people have been displaced in Gambella following an attack by armed men from South Sudan Murle tribe that killed 230 and abducted 140 women and children. (EW)