An Ethiopian born Swedish cardiologist and sixty other political prisoners were freed today after years in jail on trumped up terrorism and graft charges. 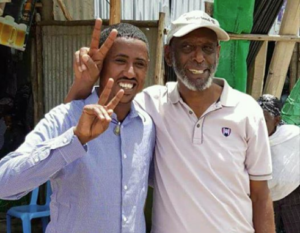 “Five years of his life have been taken away despite his innocence. Words cannot express my happiness at his release,” his daughter Amy Fikru told Reuters shortly after her father’s release.

Prosecutors last week downgraded terrorism charges against Dr. Maru et al to organizing revolt at the Qilinto prison. Thirty eight inmates, including the cardiologist were accused of starting a fire at the notorious Qilinto prison in August 2016. Dr. Maru and co defendants insist they were innocent.

A government report says 23 inmates died in the arson but independent rights groups confirmed the death of at least 67 prisoners and examination of the bodies indicate that 45 of the prisoners died from gunshot wounds. A prison guard on duty at the time of the fire told media that some of the victims were shot dead by prison officers as they run away from the fire.

Dr. Maru has been in prison in Ethiopia since May 2013 on charges of questionable import of medical equipment to his hospital, a charge critics believe was politically motivated. After spending four years in Ethiopia’s notorious jails, he was acquitted in May 2017. But he and 38 others were charged again over a fire that broke out at the Qilinto prison.

Prominent among the freed political prisoners today is Agbaw Setegn, a representative of the opposition Blue Party in Gondar.

Ethiopians welcomed the release of hundreds of political prisoners in the last few months but want to see the many more thousands still in jail and undisclosed camps to be freed.