Ethiopia: No solution in sight to the plight of displaced Amharas

Over 900 Amharas displaced from Buno Bedele in the Oromo region called for help to authorities to provided them with food and water. 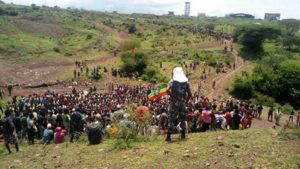 The displaced have been temporarily settled in an arid area called Haro, an area with no water source to survive.

They said they had lived in Buno Bedele for 40 years after they were taken to the region in a government resettlement program. But they said they were told few months ago that the land did not belong to them and were evicted.

Speaking to ESAT, representatives of the displaced said the situation of children and seniors was even worse.

About 500 Amharas recently displaced from the Benishangul Gumuz region have become homeless in Bahir Dar.

In another news, police clashed with residents in the town of Arbaminch in Southern Ethiopia as authorities demolish thousands of houses saying they were illegally built.

The residents however said they had legally built their houses and lived in the area called Gurba in Arbaminch town for over 20 years.

Over 20 people were injured as their houses were demolished in the wee hours of the night.