Leaders of the Oromo Democratic Front (ODF) have arrived in Ethiopia’s capital Addis Ababa to continue talks with the government. 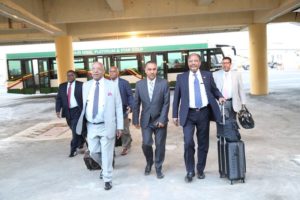 The Front announced a week ago that it had held talks with representatives of the Ethiopian government in an undisclosed location outside Ethiopia and that the two sides have agreed to continue the talks in Addis Ababa.

“Talks will focus on widening the democratic space and address the domination of the country’s politics by one party, which has become detrimental to any democratic endeavor,” Dima Negeo, vice chair of the Front said speaking to reporters on arrival at the Bole International Airport,

“The goal is to create a favourable condition for all political parties to take part freely,” Negeo said adding that “Nonviolent struggle is the way forward and we encourage all parties to adopt peaceful struggle.”

Chairman of the Front, Lencho Latta, who said he has been trying to engage with the government for the last six years, noted that the ODF aims at democratizing the federation. He however said major political issues were not raised in the first round of talks abroad.

The ODF, formed in 2013, is a splinter group from the old Oromo Liberation Front (OLF) that has been outlawed by the government among other opposition parties.

The ODF is also a member of the Ethiopian National Movement (ENM), formed two years ago by four Diaspora opposition political groups. With the ODF holding separate talks with the regime, the future of the alliance remains blurred.