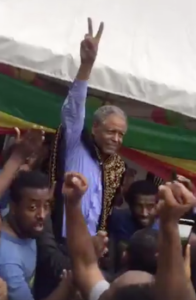 Ethiopia’s high profile political prisoner was freed today and welcomed at his residence by a jubilant crowd.

The leader of an opposition movement, Andargachew Tsege, was kidnapped at a Yemeni airport in June 2014 in a joint operation by the Yemeni and Ethiopian intelligence and was held in solitary confinement until his release today. He was sentenced to death in absentia on trumped up terrorism charges in 2009.

“I told the regime security that I would rather face my death sentence than see my country in such a state,” Andargachew told the crowd celebrating his release at his residence.

“I am free today, but there are so many issues that need to be resolved [in the country]. The last four years in prison has taught me that there are outstanding issues in our country that we need to address,” he said.

The father of three had spent much of his time in UK as a political refugee. He returned home twice but faced imprisonment and harassment by the regime. His arrest drew international condemnation and the UK was criticized for not doing enough to secure the release of one of its citizens.

The 63 year old political prisoner is not new to Ethiopian politics. He spent his tender years as a young revolutionary and at the time of his arrest, he was the general secretary for Patriotic Ginbot 7, a group outlawed by the regime. He formed Patriotic Ginbot 7 after the 2005 rigged elections where the opposition won considerable seats in parliament and controlled the city council.
News of his imminent release came on Saturday in the form of an amnesty by the government with the country’s attorney general announcing the pardon of Mr. Tsege and over 700 other political prisoners. That announcement was welcomed by Ethiopians at home and abroad with some of his supporters flocked at his residence in Addis Ababa singing and dancing in jubilation.