Andargachew Tsege says PM spoke to him on various issues 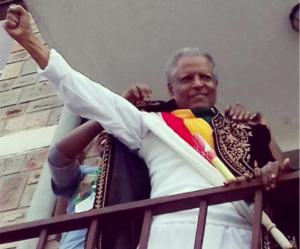 Andargachew Tsege, a political prisoner who was on death row and released yesterday after four years of imprisonment, said Prime Minister Abiy Ahmed spoke to him on a number of issues.

He however told ESAT on a phone interview that he would not give details of the discussions with the PM.

“I have spoken to the Prime Minister on a number of issues. We have discussed so many important issues, but I would not go to the details,” he said on the phone from Addis Ababa.

Speaking about his health, Andy said his health is even better after four years. “I am physically and mentally fit. I am in a better mental and physical condition than four years ago. I came out of prison stronger physically and spiritually.”

Ethiopians at home and in the Diaspora yesterday euphorically celebrated the release of Andy Tsege.

In the capital Addis Ababa, hundreds of people gathered at the residence of Andy’s parents singing and chanting slogans praising the prominent freedom fighter. Andy briefly addressed the crowd saying he was free but there are many issues that the country needs to deal with.

Ethiopians in Washington, DC, Toronto, Switherland and other corners of the world gathered to celebrate the release of a man seen by many as a freedom icon.

Meanwhile UK Foreign Secretary issued a statement on the release Andy, who is a British national. “I am pleased Andargachew Tsege is now able to reunite with his loved ones after being separated from them for so long,” Foreign Secretary Boris Johnson said.

“After four unbelievably hard years on death row this is wonderful news for Andy, his partner and their children. The new Ethiopian government should be recognised for what they have done today. The most important thing now is that Andy is released from prison and able to reunite with his family as soon as possible,” Reprieve, an international organization that campaigned for the release of Andy said in a statement.

His wife, Yemi Hailemariam hopes Andy will come home to London soon to reunite with her and their three children. “I am so thankful that the pain and anguish my children have had to go through could now soon be coming to an end. Helawit, Yilak and Menabe have spent too long without their father and we are all hoping Andy will be free to come home to us soon.”

The leader of an opposition group based abroad, Andargachew Tsege,63, was kidnapped at the Yemeni airport in June 2014, in a joint operation by the Yemeni and Ethiopian intelligence. He was sentenced to death in absentia in 2009.

The popular political leader is not new to Ethiopian politics. He spent his tender years as a young revolutionary and at the time of his arrest, he was the general-secretary for Patriotic Ginbot 7, a group outlawed by the regime