After a year of relentless campaign by Ethiopian Americans who were able to garner support from many congressmen, a human rights resolution had passed the House on Tuesday, which among others supports respect for human rights and encourage inclusive governance in Ethiopia. 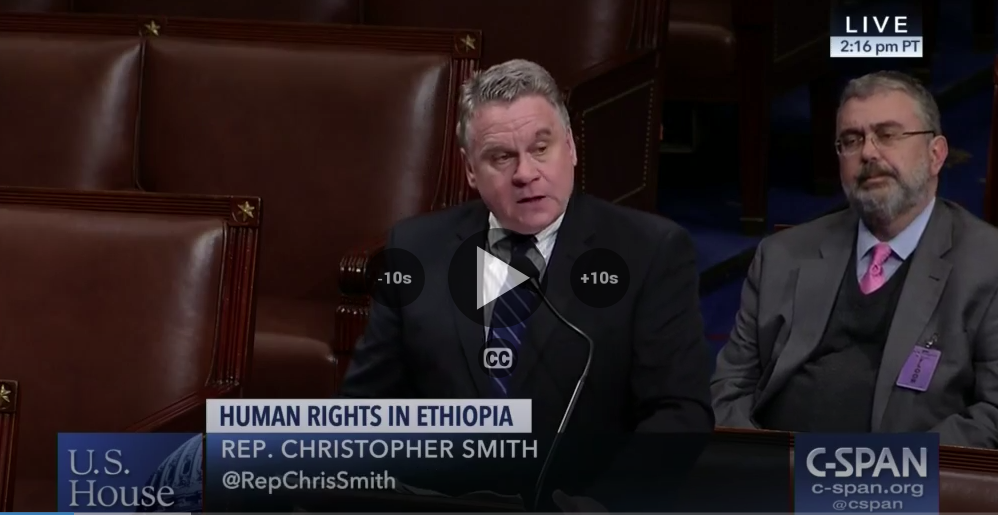 Last minutes effort by the Ethiopian regime that uses a Senator and a close ally, Jim Inhofe of Oklahoma, who is an ardent advocate of the tyrannical minority regime, and lobbyists who are paid hundreds of thousands of dollars, was to no avail.

Several members of congress spoke in favor of the resolution that was introduced in the House in February 2017 by congressman Chris Smith of New Jersey.

“When a society witness the arrest of over 22,000 persons and the closing of over 200 NGOs, we should expect to see the trust between communities and government suffer as a result. Istead, government shall work towards promoting this trust that is critical to the rights of Ethiopians to live freely and safely at home,” said Congressman Bill Keating of the Massachusetts.

Congressman Mike Coffman of Colorado and Chris Smith have also took turns to highlight the plight of Ethiopians by a regime that has no tolerance for dissent and the right to free expression of ideas.

The Ethiopian Ministry of foreign Affairs meanwhile said in a statement that passing the resolution was “untimely.”

“The Government of Ethiopia believes that the passing of the H. Res. 128 by the U.S. House was untimely and inappropriate,” the Foreign Ministry said.

A blogger who is known to support and defend the regime in Addis Ababa was not happy about the Foreign Ministry’s response.

“The response from the Foreign Ministry to US Congress is so weak that maybe they deserved the resolution,” wrote Daniel Berhane on his Facebook page. “Ethiopian gov’t got a [expletive] slap from US today. The lesson? There is no pleasing the imperial mindset. Either you get respected or you get insulted. No middle ground,” he added in another post.

A last-ditch effort by the Ethiopian Ambassador in Washington, DC, as well as a letter by Senator Jim Inhofe of Oklahoma encouraging members to reject the resolution had failed.

Activists who spoke to ESAT say now that the House passed the resolution, their next target is the Senate which has its version of the resolution, S. Res. 168, introduced in May 2017 by Senator Ben Cardin of Maryland.

Both resolutions, among others, demand the Ethiopian regime to “grant the United Nations (U.N.) High Commissioner for Human Rights and U.N. Special Rapporteurs access to conduct a comprehensive examination of the state of human rights in Ethiopia and work with such entities to improve human rights conditions.”

The resolutions also call “on the Secretary of State, in cooperation with the Secretary of the Treasury, to apply appropriate sanctions on foreign persons or entities responsible for extrajudicial killings, torture, or other gross violations of internationally recognized human rights committed against any nationals in Ethiopia as provided for in the Global Magnitsky Human Rights Accountability Act.”