Facing stern criticism in Gondar over land Ethiopia agreed to hand over to Sudan, Ethiopian Prime Minister, Abiy Ahmed, said he would raise the issue with Sudanese President Omar al-Bashir when he meets him in Bahir Dar tomorrow. 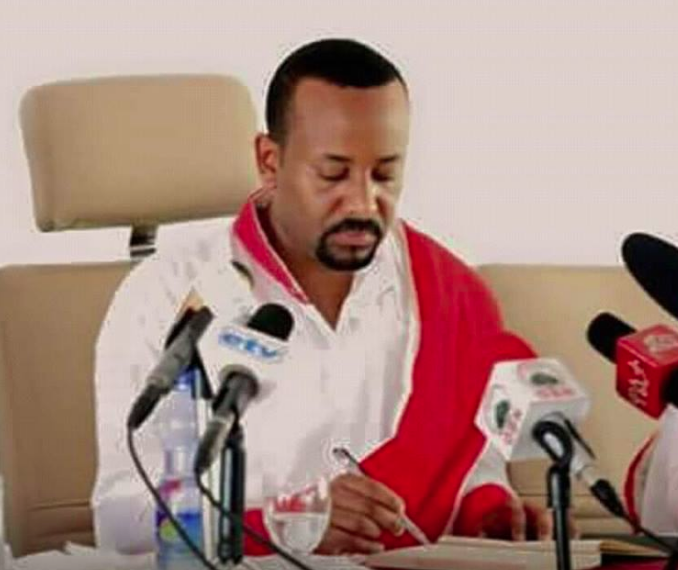 Residents of Gondar grilled the Premier over land the government has agreed to hand over to Sudan and areas in North Gondar forcefully annexed to Tigray by the TPLF.

Dr. Ahmed was in Gondar on Friday where he held a town hall meeting with residents.

The Prime Minister in response said he would raise the issue with Sudanese President Omar al-Bashir who will be in Bahir Dar for the Tana High-Level Forum on Security in Africa, an annual meeting of leaders on African security issues.

The Prime Minister said the first task should be to demilitarize the border areas, removing soldiers of both countries and allow people to go about their daily lives peacefully.

The TPLF led regime in Ethiopia has agreed to hand over a huge chunk of fertile agricultural land to Sudan despite objections on the part of the Ethiopian farmers who believe the land is historically theirs,

Atalay Zafie, a member of the the Wolkait, Tegede and Telemt Committee, known simply as “the Wolkait Committee” a group working to restore land forcefully annexed to Tigray by the TPLF, challenged the Prime Minister that the issue of the people of Wolkait was not a campaign by Diaspora Ethiopians nor a complaint over lack of development as described by the Prime Minister in his visit to Tigray last week.

According to journalist Getachew Shiferaw, who was in Gondar to cover the Prime Minister’s visit, Ahmed have also held a separate meeting with the Wolkait committee over the issue and has reportedly promised to resolve the issue according to the constitution of the land.

Members of the Committee on their part said their plea to the government, which has been ignored, was for the demand by the people of Wolkait to be resolved based on the constitution.

The Premier’s meeting with the Wolkait Committee was a significant breakthrough as the TPLF regime has never given recognition to the Committee nor to their plea for the restoration of their landland.

“Wolkait! Wolkait!,” residents of Gondar shout as the Premier and other dignitaries speak at the city’s stadium today.