Ethiopia: PM says military, security and intelligence should be free from politics

In one of his bold promises to Ethiopians, the newly elected Prime Minister, Abiy Ahmed, said on Sunday that the military, security and intelligence would be restructured in a manner that would be free from political influence. 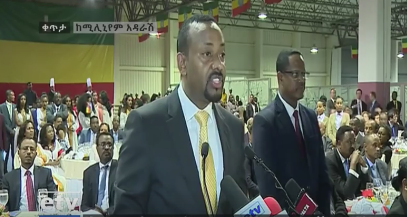 The Prime Minister was speaking at a public event in Addis Ababa where he also promised to “review controversial” laws of the land.

The new Prime Minister took office two weeks ago at a time when the country is in a state of emergency imposed for the second time after it plunged into a political crisis that is in the making for the last three years.

He also said all efforts would be made to make the next election free and fair and allow opposition parties to operate freely.

The opposition is meanwhile demanding that the Prime Minister hold an all party-dialogue.

Speaking from in Addis Ababa last week Yeshiwas Assefa of the Blue Party and Merera Gudina of the Oromo Federalist Congress said it was time for the Prime Minister to start walking the talk.