Ethiopia’s new Prime Minister held talks and dined with the opposition that is waiting for tangible actions from him. The new PM, Abiy Ahmed, has also continued his tour to the regions. He was in the Tigray capital of Mekelle today where he delivered speech in the local language. 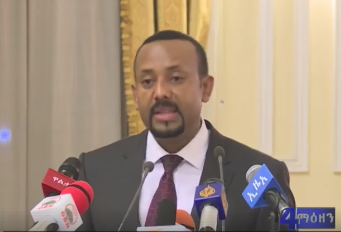 While the opposition appreciates his effort in reaching out to them, they are calling for more of actions than words.

“We want the Prime Minister to walk the talk,” Merera Gudina, leader of the Oromo Federalist Congress told the Amharic Service of the Voice of America. “You can’t make changes just by making speeches, we need to actions,” Gudina added.

Yeshiwas Assefa of the Blue Party aso said he expects the Prime Minister to hold an all-party dialogue.

Speaking about the closed door meeting with the PM, both Gudina and Assefa said Ahmed did not put a specific timetable for dialogue although they felt optimistic.

Following the closed door meeting with the opposition, the Prime Minister hosted dinner for leaders of opposition parties, civic society representatives and community leaders in the capital.

The Prime Minister today flew to Mekelle, the regional capital of Tigray where he addressed a gathering of an excited crowd for listening to a Prime Minister who speaks their mother tongue, Tigrigna. Ahmed grew up in the Oromo region but is also fluent in Tigrigna.

“Apparently, his stay at the intelligence and security apparatus that is controlled by the Tigrayans gave him the opportunity to practice the language,” a critic of the government told ESAT.

The opposition says touring the regions and making flowery speeches is one thing, but acting on a promise is another.

They expect the Prime Minister to act on getting rid of the draconian laws including the controversial state of emergency, which has been imposed for the second time in two years.

Two of the most repressive laws that opposition figures want to see annulled are the so-called anti-terrorism law and the Charities and Societies Proclamation.