Abiy Ahmed, who swore in today as Ethiopia’s Prime Minister, said that the country needed to respect human rights, freedom of expression and assembly in the spirit of the constitution, which has been routinely violated by the regime. 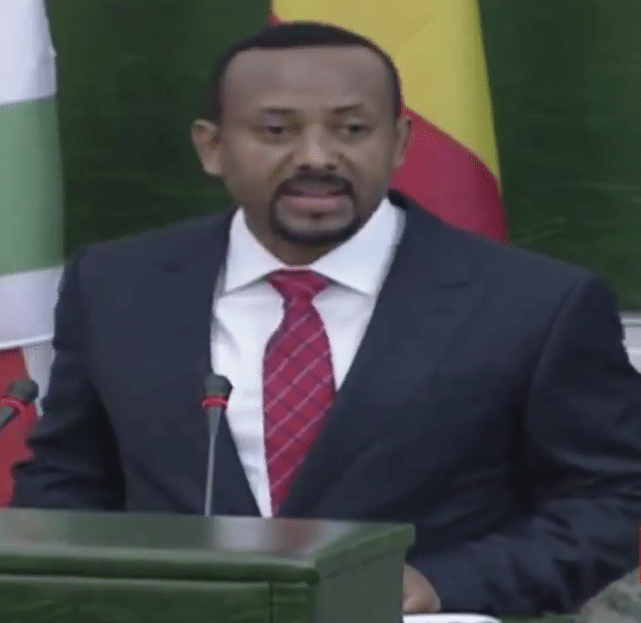 In a speech that called for healing, reconciliation and unity in a country that has plunged into a political crisis of its own making, Abiy Ahmed (PhD), promised to make improvements in areas of strengthening democracy, freedom and justice as well as rule of law. He also underscored the need for public participation in the political process and promised to create a level playing field for opposition parties.

The Prime Minister, who said the country wishes to peacefully coexist in harmony with all its neighbors, also extended an olive branch to Eritrea saying the two countries should resolve what he called a “misunderstandings” for the mutual benefit of the people on both sides. He said he would do all he could to restore and strengthen relations between the to countries.

The two countries that have shared common history, linguistics, culture and geopolitics have been at loggerheads after the end of a two-year bloody war in 2000. At least 70,000 people perished on both sides, in what was described by many as a senseless war.

In a speech that also depart from his predecessors, the newly anointed Prime Minister also called on Ethiopians and Ethiopian born compatriots in the Diaspora to return to their country and contribute their share to the development of the country. He expressed the readiness of his government to support those who wish to return.

“The country has serious challenges especially in areas of democracy, deep-rooted poverty, organized corruption and maladministration,” Ahmed said adding that “all voices should be heard and everyone should be allowed to participate in building a democratic system.”

“Citizens should be allowed to move freely in their country and pursue their right to prosper.”

“There should be a level playing field for all political parties,” Ahmed said towards the the end of his speech.

Ahmed’s speech was similar to his monologues and interviews that he gave on several occasions, calling for unity, getting rid of divisiveness and ethnic animosity.

Abiy Ahmed was elected last week as chairman of the ruling Ethiopians People’s Revolutionary Democratic Front (EPRDF), the party in power in Ethiopia since 1991. The outgoing Prime Minister, Hailemariam Desalegn has been in the position since the death of the party’s strong man, Meles Zenawi in 2012. But his role has been described as a placeholder, wielding no real power.

Many hope the new Prime Minister would have real power to realize his grand promises.

Four parties representing Amhara, Oromo, Tigray and Southern Ethiopia make up the EPRDF. Ahmed’s election as chairman of the ruling party would automatically make him the sole contender for the premiership in a Parliament where 100% of the seats are held by the ruling party.

Ethiopians generally welcomed the speech with positive expectations for change, while some still doubt if the Prime Minister would be able to deliver his promises in country where politics, military and economic power is still controlled by a minority clique called the Tigray People’s Liberation Front (TPLF) for nearly three decades.

Meanwhile, the country remains in a state of emergency imposed in February for the second time in two years. The last three years has seen deadly anti-government protests in which hundreds of people were killed, at least 2,000 by some estimates, at the hands of regime security forces. Tens of thousands of political prisoners remain in jail, while over a million people have been displaced from their villages following a crisis that is blamed on ethnic clashes.