A day after immigration authorities banned Eskinder Nega from leaving the country, reports reaching from Addis Ababa say authorities have returned his passport and the journalist was told he could leave the country. 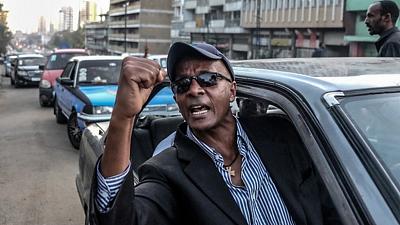 The ward winning journalist was about to board his plane to Amsterdam yesterday when immigration authorities at the Addis Ababa Bole International Airport confiscated his passport and told him he could not board his flight.

Nega was to travel to the Netherlands where he would be a guest of honor at the 50th anniversary of Amnesty International on Saturday. It was not clear if he managed to find a flight on Friday but sources in Addis Ababa say the journalist was looking for last minute tickets. He was also scheduled to attend an event organized by Ethiopians in his honor.

The journalist was in and out of prison for eight times and served six and a half year in his last detention over trumped up terrorism charges. He was released in February together with other journalists, bloggers and leaders of opposition parties.

Last month, he and his colleagues were arrested again and detained for a week after authorities accused they had displayed an Ethiopian flag without the pentagram emblem, a mark Ethiopians consider a satanic symbol.