Four people were killed and over sixty others injured when a bomb was thrown at a bus terminal in the Southern Ethiopian town of Moyale. 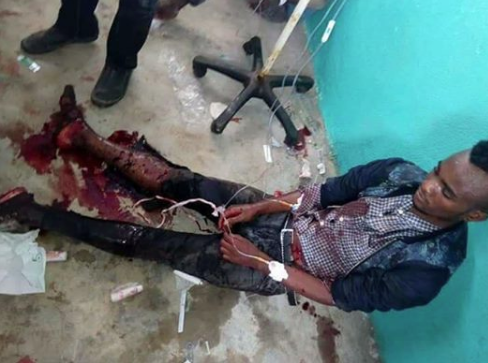 Sources sent to ESAT gruesome pictures of the aftermath of the bomb attack which local officials blamed on the Somali Region Liyou Police.

Security officials in the Oromo regional administration blamed the Somali Liyou Police, the national army and soldiers of the Command Post for what they called the continued and unnecessary loss of lives in the town and in the Oromo region.

New round of clashes between the Oromo and Somali communities in Southern Ethiopia has reportedly resumed last week. Thirteen people were killed in the town on March 10, 2018 when soldiers of the Command Post, the military unit in charge of the state of emergency, opened fire on residents going about their daily lives. Over sixty others were injured in that attack and about 40,000 fled to Kenya in the aftermath of the attack.

The newly appointed Prime Minister toured the Somali region last week in a bid to mend fences between the two communities.

Attack by the Somali Liyou Police and Agazi soldiers of the regime against the Oromos in the past two years in the Somali region has resulted in the death of hundreds. The ethnic strife between the two communities has also resulted in the displacement of about 1.2 million Oromos from their villages.