Security forces have continued arrest and intimidation in various parts of the country using a state of emergency imposed for the second time and for celebrating the election of a new Prime Minister. 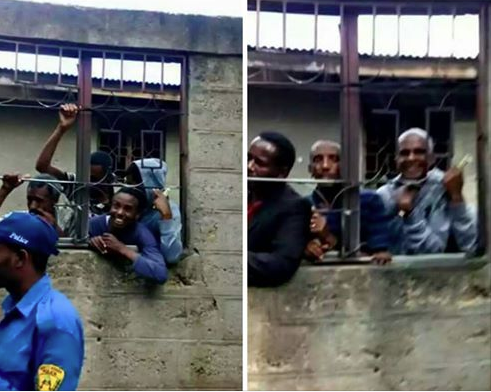 Over twenty people were arrested in Dire Dawa, Eastern Ethiopia after they had taken to the street to celebrate the election of Abiy Ahmed, as the new Prime Minister of Ethiopia.

Ten people were arrested in Bahir Dar and have been detained without charge.

A priest who refused the installation a utility pole in the premises of his church was sent to prison for the fourth time in the town of Debre Tabor. The priest, Aba Berhan, was also targeted for adorning his church with an Ethiopian flag without the regime’s pentagram emblem at the center, which Ethiopians consider a satanic symbol.

The new round of arrests came on top of the re-arrest of journalists, bloggers and opposition figures a week ago in Addis Ababa.

Journalists Eskinder Nega, Temesgen Desalegn; bloggers collective Zone 9 and Seyoum Teshome as well as a number of opposition political figures were arrested and thrown to jail merely few weeks after their release after years of imprisonment.