U.S. Secretary of State, Rex Tillerson, will travel to Ethiopia next week amid political crisis in the country as nationwide protests call for the demise of 27 years of dictatorship and as a rule by state of emergency decree was put in place for the second time in two years.

According to a press statement by the U.S. Department of State, on his first official trip to Africa, Secretary Rex Tillerson will travel to Chad, Djibouti, Ethiopia, Kenya, and Nigeria, March 6-13, 2018. 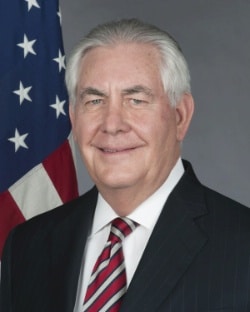 In Ethiopia, he is expected to meet with political leaders and visit the African Union Commission based in the capital Addis Ababa.

“In particular, he plans to discuss ways we can work with our partners to counter terrorism, advance peace and security, promote good governance, and spur mutually beneficial trade and investment,” Heather Nauert,
Department Spokesperson wrote in a press statement.

A strategic U.S. ally in the Horn of Africa, the Ethiopian regime has come under serious criticism for extrajudicial killings of protesters and crackdown on dissidents, journalists and rights activists.

The ruling Tigray People’s Liberation Front (TPLF) has been in power since 1991 when its guerrilla fighters took control of Addis Ababa upon the demise of a communist regime and by the blessing of the U.S. The TPLF oligarchy has been ruling with absolute power since then.

Nationwide protest and uprising in recent years has shuddered the regime and relentless demands by the people for a fair share of political and economic rights have given some level of confidence even to some politicians of member parties of the ruling EPRDF quasi coalition to challenge the TPLF, a ruling clique that has outright political power.

The U.S. through its Embassy in Addis Ababa said it “strongly disagree” with the state of emergency declared on February 16, a day after the resignation of Prime Minister Hailemariam Desalegn, who is seen by many as a placeholder after the death of TPLF’s strong man Meles Zenawi. Desalegn, who hails from the Southern part of the country, has not exercised any political power in his five year stay as the Prime Minister of a regime where real power is solely controlled by minority Tigrayans.

Officials at the State Department has advised Ethiopian Foreign Minister, Workneh Gebeyehu, against declaring a state of emergency when he visited Washington, DC in mid February, according to sources.

The ongoing political crisis in Ethiopia will surely be top on the agenda when Tillerson meets TPLF leaders.

Foreign Ministers of Russia and the United Arab Emirates will also visit Ethiopia next week, according to Ethiopia’s Foreign Ministry.
(EW)